Happy Anniversary to Prince William and Kate Middleton married a year ago on April 29, 2011.  It was the royal wedding of the year.  News tabloids like People Magazine have stated that there are renovations being made to Kensington Palace to make it “baby ready”.  Many tabloids have these rumors stating that they will be pregnant by their one year anniversary as previous heirs were conceived in that first year of marriage.  Tabloids have even stated that a trip to Africa was cancelled because of the vaccines that Kate would have to receive that could be harmful to a fetus.

Regardless of what happens in their first year, we should rejoice in the happiness of why two people fell in love.  It is a shame that when you are in the public eye that you cannot keep your life private enough to have a baby or not.  27 Miracles wants to say Best wishes and Happy One Year Anniversary to Kate and William. 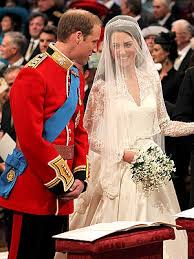